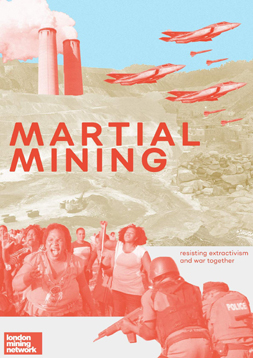 Militarism is more than a deadly diversion of funds from the health of people and the planet towards warfare. It is an essential ingredient fuelling the climate and ecological crises. The United States’ military is the world’s single largest polluter. The UK’s military-industrial sector has a carbon footprint of at least 11 million tonnes a year, more than 60 individual countries like Madagascar and Zambia. Fundamentally, extractivism is a militarised process: it violently ruptures ecosystems and habitats. In doing so, it displaces then polices human communities with ongoing connections to the land. Relatedly, militarism is an extractive process: it depends on vast quantities of natural resources to innovate and assemble more deadly technologies of control and destruction. This is the organising principle of martial mining.

Martial Mining exposes the links between mining, the international arms trade, and warfare. Across the globe, these destructive forces go hand in hand, from the minerals needed to produce weapons to the military force needed to secure and police mines themselves.

You can find an archive of our previous reports here on the London Mining Network website.